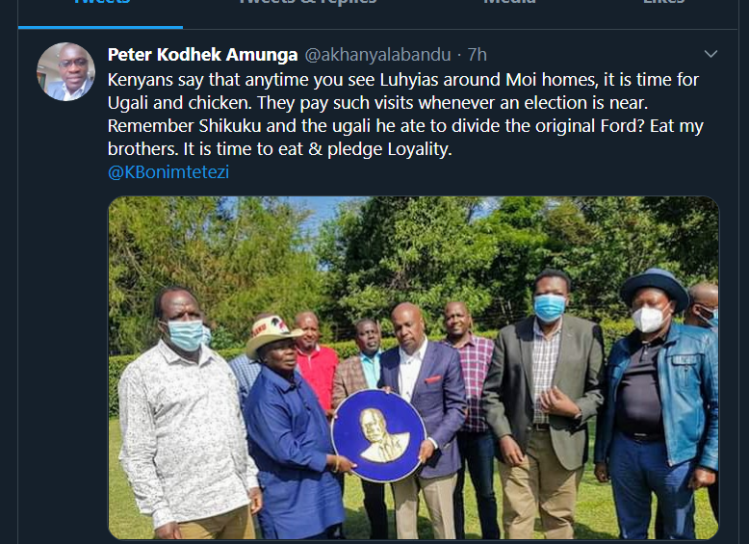 Pictures of a group of Luhyia leaders holding political talks with the Baringo Senator Gideon Moi in his Kabarak home have irritated the Luhyia Nation. You see, we the people of Mulembe are peace loving and law abiding citizens. We feel very bad when we see open defiance or acts of impunity targeted towards matters that are of life and death like covid.

Last week, turned on our small radios and heard the President of the Republic of Kenya H.E. Uhuru Kenyatta make the 5th address to the Nation on Coronavirus, where he outlined the basic government’s measures/directives that were meant to help curb the pandemic.

President Uhuru’s address was informed by an earlier meeting that he co chairs with our very own son from Western who is also the CoG chair, Governor Oparanya of Kakamega county.. In the team was also another son of mulembe nation, Eugine Wamalwa who sits in H.E. Uhuru’s cabinet. Meaning the president is working very closely with our own people and he has made them part of the team that drafted those laws and measures to be followed by Kenyans to stop the spread of corona.

Our dear president then read out the orders that included the immediate cancellation of all Public/Political gatherings within the Boarders of Kenya. He insisted on wearing masks and maintainace of social distancing.
SHOCK AND DISBELIEF
It thus shocked us, to see the very persons WHO STOOD NEXT TO THE PRESIDENT at a political function in Kabarak. They even took to social media to show us how they flew into Kabarak, presented gifts and outlined the reasons for their visit as being political. Clearly they were contravening the very laws they had made. Many of them were not wearing masks. And those who had them were wore them wrongly. They were not observing social distancing and clearly they were in a political gathering. Simply they were showing the president their middle finger.

CONCLUSION
If our senior leaders from ingo are disobeying the president and putting us all at risk like this, then what example are they showing? They deserve to be punished. But allow me to apologize to the president and plead with him NOT TO TAKE ACTION ON THOSE LUHYIA leaders. I know president Uhuru has a forgiving heart. And most likely he will be seen with them at another press conference giving more stringent measure to be followed by we the simple mwananchi. But let me sound a chilly warning to them .. and other such like leaders that families of people affected or dying of covid-19 due to their reckless behaviors GOD… IS WATCHING. GOD WILL REVENGE FOR US, THE WIDOWS, ORPHANS who have been left paying huge hospital bills. God is not man that you can lie to and play politics with. God will deal you.