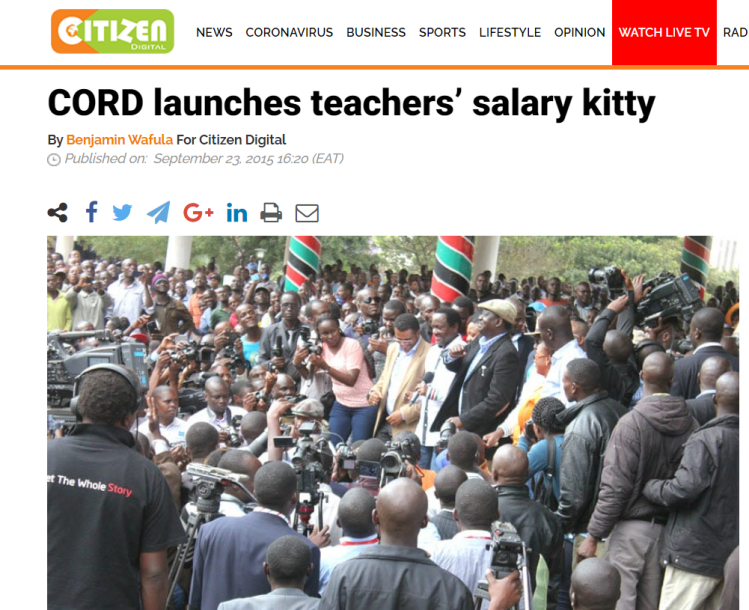 A Kisii County resident has filed a petition at the High Court seeking orders to compel Safaricom to disclose the total amount of money raised by Coalition for Reforms and Democracy (Cord) leaders to pay striking teachers in 2015.
The funds were subscribed and contributed to M-Pesa pay bill number 672672, dubbed the “Teachers Solidarity Account”.
Wiper Democratic Movement leader Kalonzo Musyoka, his Orange Democratic Movement (ODM) party counterpart Raila Odinga and Safaricom Limited are listed as respondents in the petition filed by Mr Thomson Osoro and the Rigena Human Rights Watchdog Organisation. 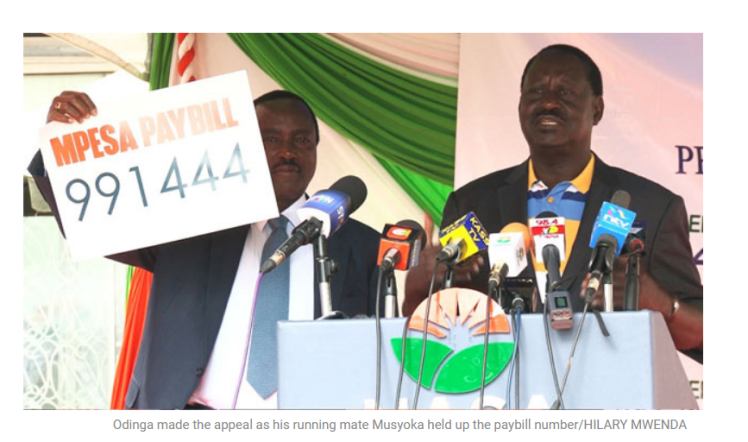 On September 23, 2015, the two Cord principals launched a funds drive to mobilise resources for striking teachers.
“I am apprehensive that the three respondents were in a scheme through collusion, falsification and forgery to defraud Kenyans for their selfish gains at the expense of the then striking teachers without justification by dealing with specific entities to swindle unsuspecting members of the public,” reads the petition.
The petitioner argues that Safaricom has failed to disclose the amount of money raised by members of the public through the M-Pesa pay bill number 672676.
“Further, the two principals have failed to account for the money raised seven years later,” said Mr Osoro, a human rights activists.
He says he has filed the petition as a member of public who is among Kenyan citizens who felt duped by the two leaders.
Duty to clients
He claims that Safaricom, being the largest telecommunications provider in the country, has failed to protect its clients from offensive financial integrity as envisaged under the leadership and integrity of Act of 2012.
The petitioner wants the court to issue an order that if the funds contributed by members have already been withdrawn by Mr Odinga and Mr Kalonzo, then they should be compelled to deposit all the funds raised for the Covid-19 kitty.
“We need the money to help buy beds and ventilators in counties to manage Covid-19 patients,” said Mr Osoro.
The petition is also seeking the court to compel the two former CORD principals and Safaricom to cater for the exemplary cost of the petition jointly.
The case is set for mention before Justice Anthony Ndungu at the Kisii High Court on September 22 this year.
During a rally at Uhuru Park, Mr Odinga announced that he and his co-principal Kalonzo Musyoka had each deposited Sh100,000 into the M-Pesa account.
“This would have enabled them to go back to class but it was indeed a contravention on the 2010
Constitution since the two principals had no mandate to pay teachers, which is the mandate of the Teachers Service Commission” said Mr Osoro.
He alleges that to date, there are no records showing how the money was used for the intended purpose as promised to members of the public.
“Kalonzo and Odinga indeed received the public contributions through the said salary kitty to pay the then striking teachers knowingly,” Mr Osoro told the court.
“Since the two Cord principals were in a campaign mood, they deceived Kenyans of goodwill that they were better placed to assist the then striking teachers which was not the case at all,” said Mr Osoro.